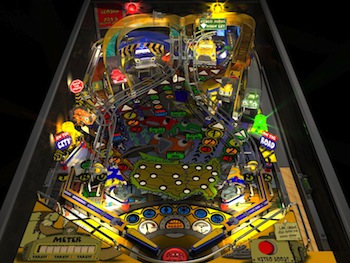 "Welcome to Big Race USA! The greatest race in the world!"
Advertisement:

Pro Pinball: Big Race USA is the third digital pinball game in the Pro Pinball series. It was released by Cunning Developments in 1998 for the IBM Personal Computer, with versions for the PlayStation and Apple Macintosh. It was also available for the Sega Dreamcast as part of "Pro Pinball Trilogy".

Unlike the dark and edgy themes of the earlier Pro Pinball games, Big Race USA goes Lighter and Softer, featuring a cartoony taxicab racing across the continental United States. In the cities, you'll get chased by police, shoot down flying saucers, and deal with gridlocks and parking garages. You can build up your speed On the Road, but watch out for challenges from other vehicles. Look for chances to make a quick getaway, and earn money to buy useful stuff at Jay's throughout the game.

The game engine is mostly the same as the one in Pro Pinball: Timeshock!, though there are more simulation controls available, allowing players to change game factors like the flipper strength, table angle, and the amount of wear on the playfield. It also has adjustable skill levels and improved graphics, such as motion blur and a subtle texture on the pinball.

Police Car: "Your skills are complete."