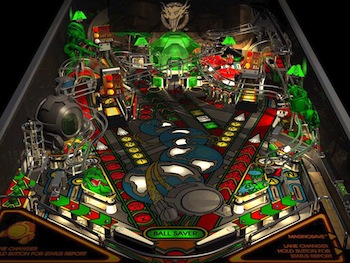 "Don't they have pinball in your time?"
"I do not know exactly what time you presently inhabit, so I cannot tell in what dark age of pre-science you dwell, but you probably don't even know that time is crystalline.
It flows from the future and crystallises at the door of the present. The future is fluid and changeable. The past is solid and cannot be altered.
But it can be shattered. And my work on the fluid future threatens to destroy the solid past.
I have created - God help us - a shock wave of anti-time which is travelling back to the dawn of history. The wave has nearly reached your time already.
We must return to the beginning of time and bring together the crystal fragments from the future to create a counter-shock wave. My time machine is crude - the best I could do in the circumstances - but it needs two to pilot and navigate. My co-pilot has...gone, and I am stuck in this time.
My past has gone already, but if we succeed, we can save your past...and your future."
Advertisement:

Pro Pinball: Timeshock! is the second pinball game in the Pro Pinball series. Created by Cunning Developments, it was released in 1997 for the IBM Personal Computer, then subsequently ported to the Apple Macintosh and PlayStation. It is also available for the Sega Dreamcast as part of Pro Pinball Trilogy.

Timeshock! tells the story of a time-traveling scientist who is out to stop a shockwave of anti-time from traveling backwards through time and destroying all of existence. The player must explore the continents to find Tachyonium to power the timedrive, then visit different eras for fragments of a time crystal. Locate and lock a fragment in each era, and pick up any interesting souvenirs along the way. The goal is to ultimately gather and lock four fragments, then travel to the Dawn of Time and create a second shockwave to nullify the first one.

As with the other Pro Pinball titles, Timeshock! features a pre-rendered playfield with several camera positions, allowing the game to offer detailed graphics and fast gameplay. It used a refined version of the game engine from The Web, allowing for even smoother gameplay and more realistic ball physics. As a result, Timeshock! is considered by many as the best game in the Pro Pinball series, both for its complex ruleset and clever use of the time-travel premise.

Silver Castle Pinball is currently making a Physical Pinball Table of this game. The project has been ongoing for a couple of years, due to problems during conversion that don't replicate the original design, as well as other problems that needed resolved. The physical cabinet will feature new artwork and tweaks to certain shots that might have been harder to shoot for otherwise. There is no release date as of yet, but it is in the prototyping phase of development.