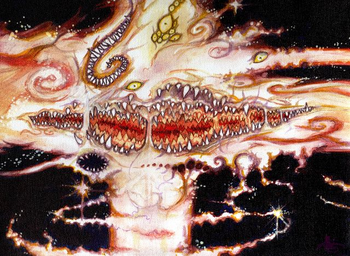 The universe... before the universe.
"In Plato's Timaeus, God does not create the universe, as does the Christian God; He simply finds it one day. It is in a state of total chaos. God sets to work to transform the chaos into order."
— Philip K. Dick
Advertisement:

In all mythologies, there exists a time before time, where the world had not yet been made. All that existed was simply Chaos (usually), and from here the gods/primordial entities would form, and shape the world as they saw fit. In other cases, there was nothing at all, and in others still, it was someplace indescribable by mortal words. It may still exist in some form, either as a (strange) part of the reality in question, or as a connected but separate reality.

Eldritch Abominations like to call this place home. It occasionally has an Anthropomorphic Personification, or may be sentient itself, in which case see God of Chaos. It's also nearly always part of a Creation Myth.

The Cosmic Egg may have resided in it. See also Chaos Is Evil and The Dark Times.

Alternative Title(s): Time Before Time, Reality Before Reality, Life Before Life, Before The Dawn Of Time