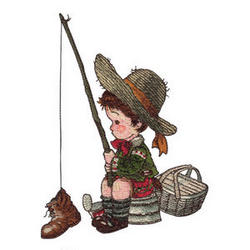 If you catch something you don't want chances are you've caught this.
"I caught a boot! It, uh, wasn't made for swimming?"
— The Player Character, Animal Crossing: New Horizons
Advertisement:

Out on a fishing expedition, and the fish aren't biting. Suddenly, there's a snag on the line. Someone's taken the bait; hook, line, and sinker. A quick flick of the rod and a frantic reeling in reveals your prize to be... an old boot. Dammit.

Several false alarms and several boots later, you start to wonder. Why are there so many boots? Fish don't wear boots, hell, they don't even have feet. Yet there seem to be more boots in the water than there are fish. And it's not just boots, either. Spare tires, tin cans, other useless junk... why does it seem like you're fishing in Lake Erie?

Well, you're just having a bad run of luck. The bane of fishermen in old cartoons and fishing minigames alike, Fishing for Sole is when you seem to pull just about everything out of the water... except for fish.

Of course, there is also magnet fishing, where a person has a strong magnet on the end of that fishing line and is trying to get metal objects under the water on purpose.

Compare I Got a Rock and My New Gift Is Lame for similar lucklessness in receiving gifts. Contrast Rod And Reel Repurposed; the character tries to use their fishing rod for something other than fishing.

There are rare ones?

Sometimes when fishing, Alice or Ares can pull up boots, cans, or *rare* cans.

There are rare ones?

Sometimes when fishing, Alice or Ares can pull up boots, cans, or *rare* cans.