Film / A Time Out of War 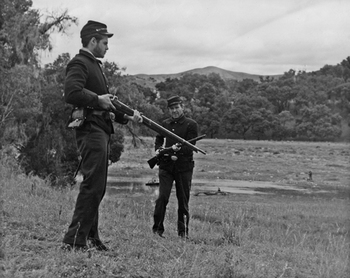 A Time Out of War is a 1954 short film (23 minutes) directed by Denis Sanders, then a student at UCLA film school.

It is set during The American Civil War—apparently during the tail end of that war, as a reference is made to the Union capturing Richmond. Alden and Connor are two Union soldiers on picket duty on one side of a shallow stream. On the other side of the stream is their opposite number, Craig, a Confederate picket. The soldiers shout casual insults at each other and sometimes take potshots from their foxholes. Eventually they declare a truce, approach opposite banks of the stream, and begin trading items. An unexpected discovery, however, spoils their temporary peace.

Based on a short story by Robert W. Chambers called "Pickets".