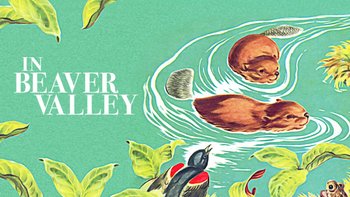 It's one of Disney's "True-Life Adventures" series of nature documentaries. This one purports to depict a single season in a valley somewhere high in the Rockies, christened "Beaver Valley". The film starts out with a lake formed by a beaver dam, and then demonstrates how the beaver builds his little home. Then it follows one young adult beaver from the clan, as it finds a mate, builds its own nest, and stores food for the winter. The film then spends time with the other wildlife of Beaver Valley—herons, ducks, otters, salmon swimming upstream to spawn, and bears.