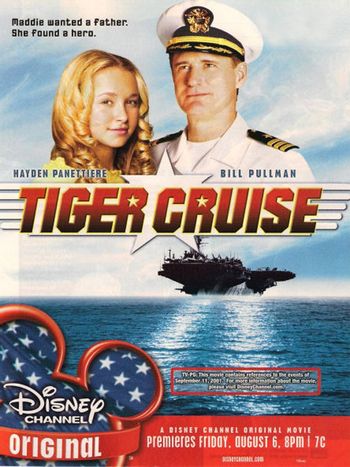 Tiger Cruise is a Disney Channel Original Movie from 2004, starring Hayden Panettiere and Bill Pullman (Hayden's brother Jansen and Jennette McCurdy also appear); despite the title and the channel, it's not about animals but rather set aboard a cruise for military families. That's just what the US Navy actually calls these things, for reasons lost on any not scholars of military jargon. Maddie (Panettiere) is a teenage girl who wants her Navy father (Pullman) to give up the life of a commander and stay at home... but during the cruise, the September 11 attacks on New York City take place, impacting all on board and causing Maddie to rethink her views.