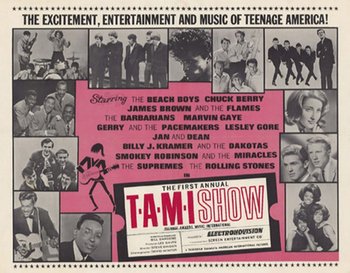 There were actually two shows, October 28-29, 1964, at the Civic Auditorium in Santa Monica. The best clips from each concert were edited together into a single film that was released on December 29, 1964.

The idea was to combine American acts with British groups that were flooding into the American pop scene with the "British Invasion" of 1964. The lineup combines flash-in-the pan 1964 acts with all-time greats. It included, in order: Chuck Berry, Gerry and the Pacemakers, Smokey Robinson and the Miracles, Marvin Gaye, Lesley Gore, Jan and Dean (who also hosted), The Beach Boys, Billy J. Kramer and the Dakotas, The Supremes, The Barbarians, James Brown, and The Rolling Stones.

Probably best remembered for a particularly dynamic performance from James Brown. It was also one of the last times Brian Wilson performed with The Beach Boys, as he had a nervous breakdown just a couple of months later and retired from touring.

Director Steve Binder later earned himself a bit of Hollywood infamy as the director of the Star Wars Holiday Special. A 20-year-old Teri Garr can be seen as one of the go-go dancers on the stage—she's next-to-last in a line of dancers that passes in front of Marvin Gaye, and she's wearing a sweater with circles on it as she dances behind the Supremes.