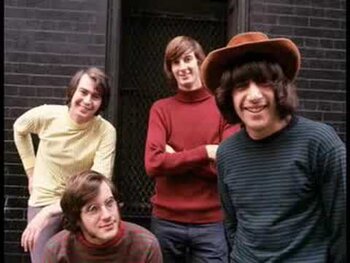 The Spoonful in 1966. From left to right: Joe Butler, John Sebastian (seated), Steve Boone, and Zal Yanovsky.
"Do you believe in magic in a young girl's heart?
How the music can free her whenever it starts?
And it's magic if the music is groovy
It makes you feel happy like an old time movie
I'll tell you 'bout the magic, and it'll free your soul
But it's like tryin' to tell a stranger 'bout-a rock and roll"
— "Do You Believe in Magic?"
Advertisement:

The Lovin' Spoonful were an American pop/rock band originally active from 1965 to 1969.

With a foot each in the folk-rock and pop music worlds, they were probably the era's biggest link (save for Bob Dylan, and perhaps The Mamas & the Papas) between the Greenwich Village Folk Music scene and the West Coast Psychedelic Rock scene. During their brief heyday, the band found success with five studio albums, numerous hit singles, and even a couple film soundtracks, recording song scores for Woody Allen's What's Up, Tiger Lily? and Francis Ford Coppola's You're a Big Boy Now.

Hot tropes, summer in the city: