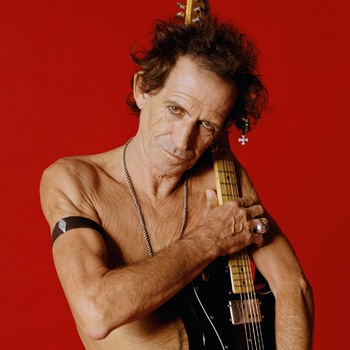 Your Worst Nightmare!
"Keith Richards said that kids should not do drugs; Keith, we can't do any more drugs, because you already fucking did them all! There's none left; we have to wait until you die and smoke your ashes! Jesus Christ! Talk about the pot and the fucking kettle!"
— Denis Leary
Advertisement:

Keith Richards (born 18 December 1943) is an English musician from Dartford, Kent, best known as a guitarist and songwriter for, and founding member of, The Rolling Stones.

One of the Stones' best-known members along with Mick Jagger and Brian Jones, he first became famous with them along with Bill Wyman and Charlie Watts during The British Invasion. His inspirations have included Chuck Berry, Jimmy Reed, Scotty Moore (Elvis Presley's guitarist), and Bo Diddley. His style is (predictably) a standard blues rock feel, emphasizing chords and rhythm over 'fastest-gun-in-the-west' style.

He is frequently listed among the top ranks of guitarist magazines, greatest song lists, and all time rock and roller greats. His musical history is enormous, with hundreds of songs to his name, and even more guitarists inspired directly or partially by him. He has also inspired actors, but more on that later.

Unfortunately, despite his talent, he is most remembered for his amazing amounts of drug intakes, and other 'misquotations' from his long career. He once famously responded to an interviewer asking him what the strangest thing he had ever snorted was by saying 'my father, his ashes ground up and snorted.' This article had to be changed by his management, since it stated incorrectly that he ground his father's ashes up 'like cocaine' when in truth it was 'with cocaine'. Also, they incorrectly stated that he listened to Motörhead, not Wolfgang Amadeus Mozart.

Richards was made even more famous by Johnny Depp, who channeled him for his portrayal of Captain Jack Sparrow in the Pirates of the Caribbean films. Richards even appeared in the third and fourth films as Jack Sparrow's father, complete with his wife's Shrunken Head.

Rolling Stone recognizes him as the fourth greatest guitarist of all time on their list of 100 Greatest Guitarists of All Time.