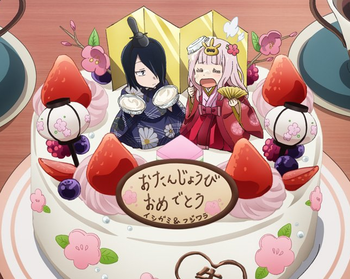 Birthdays. A celebration of the individual and their continued existence on this Earth, a personal and special day for the birthday-person, a day all about them. Except that, with only 365-366 days in a year and billions of people on the planet, no birthday is unique to the individual. Everyone shares a birthday with someone... and occasionally, a character may just run into someone else who has the same birthday as them.

This may be a cause for bonding, if the characters decide to celebrate together or, at the very least, realize they have one thing they can both relate to. This may also be a cause for a rivalry, or inflame a pre-existing rivalry, as both characters may want the spotlight, and compete to have their party be bigger and better than their enemy's. It may even mean both characters are special somehow, if the birthday they share is a Significant Birth Date.

Regardless of the result, though, the fact that these characters have the same birthday is important to the story, not just a one-off gag or a random coincidence. The characters will acknowledge it and actually care about the (usually) coincidental connection they share, even if it's because they hate each other, and can't stand having anything in common.

These characters, of course, should ideally be unrelated. Twins are inherently born on the same day, note with very rare exceptions so this trope concerns those who aren't twins... that is, unless the point is to foreshadow a Separated at Birth twist, with the characters (and often the audience) not knowing right away. This also means other familial-relationships are allowed, assuming the emphasis is on the special shared date just as in a non-related-character example. They also don't have to be literally born on the same day down to the year, so long as they share the same birthday each year they're both alive.

Truth in Television, obviously. Everyone shares their birthday with someone. An interesting thing to note is that, according to the birthday paradox

, it only takes 23 people to have a 50% chance of having a pair with the same birthday. In fiction, the fact that this trope is usually averted makes it similar to The One Steve Limit. Even though it's common in real life, unless it has some sort of significance to the story, it would be weird for two characters to share the same name, just as it would be weird for them to have the same birthday.