Can't Take Anything with You 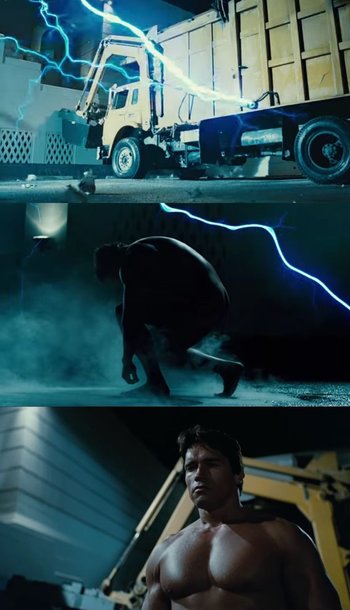 "They don't leave much to the imagination."
"Actually, on a robot, they sort of do."
Dr. Silberman: Why didn't you bring any weapons, something more advanced? Don't you have, uh... ray guns? Show me a piece of future technology.
Reese: You go naked. Something about the field generated by a living organism.
Dr. Silberman: Why?
Reese: I didn't build the fucking thing!
— The Terminator
Advertisement:

Time Travelers are often prevented from bringing along any modern technology when they go back in time. When they arrive in the past, they have to rely on the things available during that time period.

The reasons for this vary. Sometimes the time travelers simply want to avoid changing the timeline too much, and they realize that, say, leaving a modern gun behind in the middle ages could create all sorts of problems. Other times it's due to a limitation of the Applied Phlebotinum used to travel through time. In the latter case, the time traveler often arrives naked and has to find clothing somewhere. In other cases, the time travel may simply have been a surprise and they weren't prepared.

Sometimes the inverse is seen, where it's not possible to take anything from the past back to the future. (Sometimes this is justified by the claim that, for the object, the future doesn't exist yet.) Since it's otherwise not much of a dramatic limitation, this version usually only comes up in stories where a time-traveler is trying to save something (or someone) from being destroyed in the past. Not to be confused with the only saying "You can't take it with you", referring to when you die.