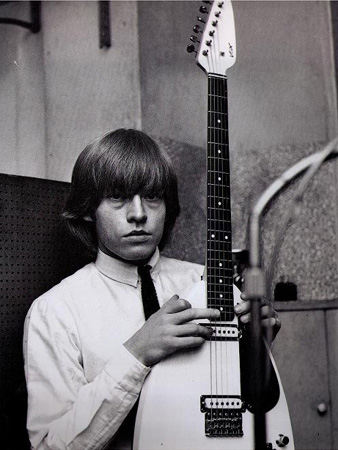 Brian Jones circa 1964, with his signature Vox Mark VI guitar. (And, yes, he is Flipping the Bird.)
"When this you see, remember me
And bear me in your mind
Let all the world say what they may
Speak of me as you find"
Advertisement:

Lewis Brian Hopkin Jones (28 February 1942 – 3 July 1969) was an English musician from Cheltenham, Gloucestershire who formed and named The Rolling Stones in 1962.

), and at the start it was clearly his band. Even after he lost the leadership position to the songwriting partnership of Mick Jagger and Keith Richards, he was still an integral part of the band musically right up through at least 1967. With the Stones, he recorded eight studio albums (ten American albums), one live album and three EP's. His years with the Stones are generally considered (along with their first few years with his replacement Mick Taylor) to be the band's classic era. A natural musician, his primary instrument was the guitar (as well as the harmonica) until roughly 1966, after which Jones became an impressive multi-instrumentalist and musical colorist. Such Stones albums as Aftermath, Between the Buttons, and Their Satanic Majesties Request would simply not be the same without his contributions.

In 1967, Jones wrote and performed the score for the German crime thriller film A Degree of Murder, which starred his then-girlfriend Anita Pallenberg. Unfortunately, it hasn't received an official release to this day.note While the film itself did receive a DVD/Blu-Ray release in Germany in 2019, the soundtrack has not yet been released in any official capacity. The following year, Jones discovered—and recorded with—the Master Musicians of Joujouka, a Sufi folk-music collective from Morocco. The resulting album, Brian Jones Presents the Pipes of Pan at Jajouka, was released posthumously in 1971, and is Jones' only official solo album.

However, Jones had some serious personality issues that led to something of a Creator Breakdown and a diminishing role within the Stones. By 1969, he was barely contributing to their music, and it reached the point where he was forced to leave the band he'd founded. Less than a month later, he drowned under suspicious circumstances, in the swimming pool of his house at Cotchford Farm in East Sussex (originally owned by A. A. Milne). Conspiracy theories as to whether or not Jones was murdered by Frank Thorogood—a builder who was doing property renovations for him at the time of his death, and evidently the last person to see him alive—remain popular to this day.

". He would be followed by Jimi Hendrix, Janis Joplin and Jim Morrison, among others. His main legacy—The Rolling Stones—is now a truly legendary rock band that has been going strong for sixty years and counting. Despite Jones's personal flaws, and the troubles that plagued his too-brief life and career, his erstwhile bandmate Bill Wyman has said of him: "As the years go by, I become even more convinced that he's entitled to that free pardon. Brian Jones is a legend and his legacy is there for all to hear. While the Rolling Stones damaged all of us in some way, Brian was the only one who died."