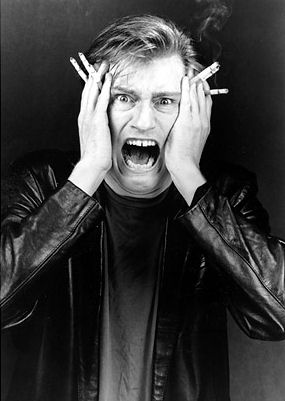 Denis Colin Leary (born August 18, 1957) is a comedian born in Worcester, Massachusetts to Irish Catholic immigrants. His routines involve a deeply cutting, rambling, profane Motor Mouth style, and is not afraid to go after whatever he damn well feels like.

He's incredibly proud of his Irish heritage, and does not apologize for his love of the Boston Red Sox, the Bruins, or Boston in general (he even forgave Bill Buckner, even though it seemed no one else will).

He's related, through various marriages, to Conan O'Brien. He's also an old friend of Jon Stewart, and is a regular guest on The Daily Show.

Due to a personal rift between Leary and Bill Hicks, fueled by allegations of plagiarizing Hicks' material, it's best not to mention him around fans of Hicks.

He's appeared in more than 40 films, including:

TV Series involving him in some way include: