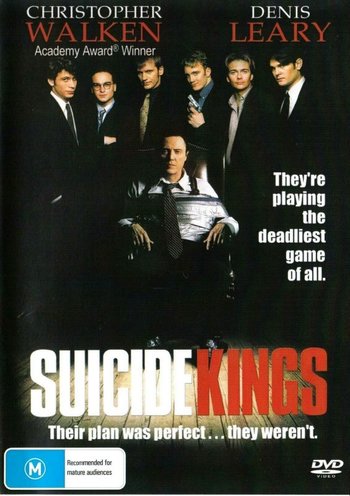 "That phone call I got, it came from outside high walls and fancy gates; it comes from a place you know about, maybe, from the movies. But I come from out there, and everybody out there knows: Everybody lies. Cops lie, newspapers lie...your parents lie. The one thing you can count on: Word on the street. Yeah, that's solid."
—Charlie Barrett
Advertisement:

A 1997 American Black Comedy Psychological Thriller, and the feature film debut of TV director Peter O'Fallon, telling (with heavy amounts of Flashbacks) the tale of two kidnappings and the web of betrayal that spawned them.

When Impoverished Patrician Avery Chasten (Henry Thomas) finds out that his sister Elise (Laura Harris) has been kidnapped and the Police Are Useless, he turns to his three lifelong friends—Elise's boyfriend Max (Sean Patrick Flanery), Nouveau Riche blusterer Brett (Jay Mohr), and medical student T.K. (Jeremy Sisto)—to get the ransom by any means necessary.

Their plan: To abduct retired crime boss Charlie Barrett (Christopher Walken) and force him to pay the ransom. With the unwitting help of their friend Ira (Johnny Galecki), who provides his parents' palatial home in the belief that they plan to spend the weekend playing poker, they successfully kidnap Charlie and force him to use his underworld contacts to get in touch with the kidnappers.

As Charlie's right-hand man, ruthless thug Lono Veccio (Denis Leary), simultaneously searches for Elise's kidnappers and for Charlie's, the captive crook plays a game of mental cat-and-mouse with his captors, learning the real story behind the kidnapping of Elise while working to find their weak spots and convince them to set him free.