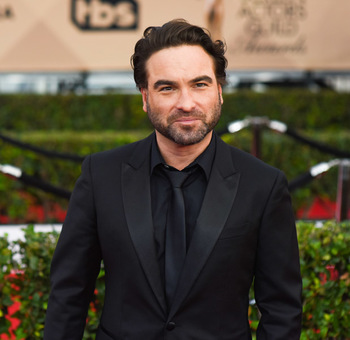 John Mark "Johnny" Galecki (born April 30, 1975 in Bree, Belgium - his father was stationed abroad with the Air Force at the time) is an American actor who is famous for playing experimental physicist Leonard Hofstadter on the popular sitcom The Big Bang Theory and to a lesser extent David Healy on Roseanne. Both shows are considered some of the highest rated and most watched American live-action TV programs of their respective original airing runs.

Johnny has also made appearances in a number of movies, including as a child in National Lampoon's Christmas Vacation.

After 2010 he has attempted to launch several shows as a producer, though none has yet found major success. He is also friendly with a number of rock musicians, particularly My Chemical Romance and Badflower, and has occasionally appeared on stage as a guest guitarist or drummer. Also plays the cello, which was featured a few times on TBBT.

Since the ending of TBBT and the cancellation of the Roseanne revival, Galecki made a brief return in the spin-off show The Conners. Since then, he has been out of the limelight, focused on raising his young son.