Film / The Opposite of Sex 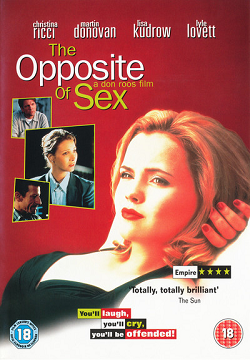 The Opposite of Sex is a 1998 black comedy film written and directed by Don Roos, starring Christina Ricci, Martin Donovan, Ivan Sergei and Lisa Kudrow.

The main protagonist is Dede Truitt (Ricci), a troublemaking teenage girl who leaves after home after her father dies and moves in with her gay brother (Donovan). After a few weeks she seduces his boyfriend (Sergei) into bed and ends up pregnant. After that, the two of them take off to Los Angeles, emptying the brother's bank account along the way.

The Opposite of Sex provides examples of: