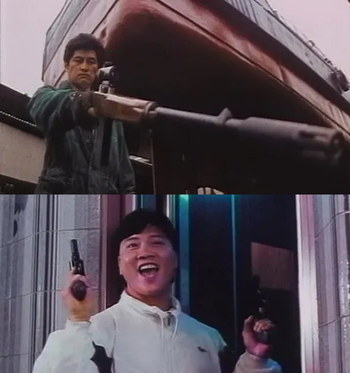 Lam Wai (above) is doing his job, while Alex Man (below) is just happy to get a share of the action.

Heroic Brothers is a 1991 Heroic Bloodshed film (with a title like that, would you expect otherwise?) starring David Lam Wai and Alex Man (from Tragic Hero), respectively as a Vigilante Man and Cowboy Cop who find themselves on opposing sides while trying to investigate a drug smuggling ring in Hong Kong, but ends up becoming a team when they have to face a common enemy, much to the former's annoyance.

Huan Sai-keung (Lam Wai) is a former hitman who lose his wife and is now a vigilante, working as a businessman by day while masquerading as a dangerous assassin and murderer of criminals by night. Hired by the mysterious Mr. Hsu to dispose of a drug-dealing syndicate, Huan's killings are being investigated by Hong Kong police officer Man (Alex Man), a loose cannon in the police force who shoots first and ask questions later. But eventually they realize the truth behind the Greater-Scope Villain, their real enemy, at which point both men have to work together to survive in an epic final showdown.

Part of a consecutive string of Heroic Bloodshed movies from early 90s-Hong Kong cinema, spawned by the success of The Killer and following the formula to a T, but entertaining enough with plenty of shootouts (including a final action scene in an industrial zone where Lam Wai and Alex Man takes on at least 60 faceless mooks and winning) to keep fans of the genre satisfied.