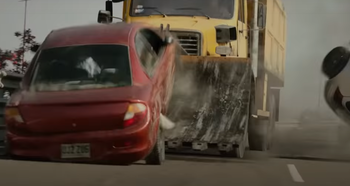 Construction vehicles are Exactly What It Says on the Tin, vehicles intended for building large facilities, but these guys didn't get the memo. The trope flips the intention on its head, using tools of creation as weapons of war.
Advertisement:

A bulldozer tends to be a popular pick because its resemblance to a tank and its front blade that is capable of moving large chunks of land makes it a very versatile vehicle. As it is more useful in both landscaping and destruction than most other vehicles, a savvy character looking to cause mayhem will likely pick one as his/her go-to option.

Other popular picks include the front-end loader (with its large all-terrain wheels and maneuverable scoop), the wrecking ball crane (the quintessential demolition vehicle), and the excavator (with its modifiable arm and the ability to turn a complete 180° or even 360°). A steamroller is a popular pick for flattening characters against the ground. In sci-fi settings, construction robots may count as well if their programming is overridden to cause nothing but destruction. It may also count exo-suits or mechas that were primarily created for the use of construction but are then commandeered to be used for combat instead.

Farm machinery also count towards this trope. In particular, combine harvesters seem to lend themselves to it; with their rotating blades being able to reduce unfortunate passersby into so much chunky salsa, like an oversized version of a chainsaw.

Super-Trope to Forklift Fu. Sub-Trope of Irony and Car Fu. See also No OSHA Compliance for when general safety in a workplace is thrown out the window. Compare This Is a Drill and Drill Tank.

No relation to Deconstruction and Bias Steamroller.

In the climax of the movie Rio 2, Linda commandeers a bulldozer and saves Eduardo with it when one of the loggers tries to run him over after he's knocked out of the sky.

In the climax of the movie Rio 2, Linda commandeers a bulldozer and saves Eduardo with it when one of the loggers tries to run him over after he's knocked out of the sky.