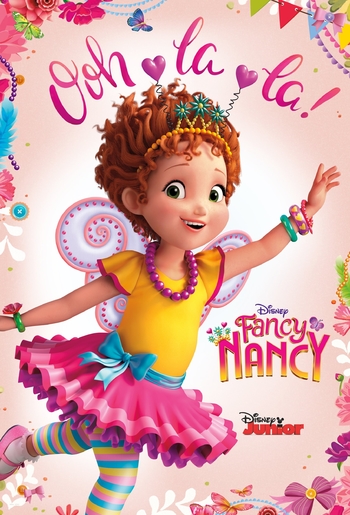 Fancy Nancy is a Disney Junior show which premiered on July 13, 2018. It is based on the titular books by Jane O'Connor and Robin Preiss Glasser, and to quote the description:
Advertisement:

"Fancy Nancy is a young girl with a larger than life personality, who adores all things fancy. She always dresses extravagantly, wearing boas, tutus, ruby slippers, fairy wings, and fuzzy slippers. Nancy loves using big fancy words such as 'iridescent', 'ecstatic', and 'extraordinary' and anything in French. She has redecorated her bedroom with everyday items, such as feather boas, Christmas lights, paper flowers, and hats. Her favorite doll is named Marabelle Lavinia Chandelier. Nancy captures hearts by nearly getting caught up in the glitter, but, in the end, always discovering what's truly important. In Nancy's opinion, her family is ordinary and dresses rather plainly, so Nancy decides to hold a class in the art of fanciness for her family. They oblige, and Nancy helps to dress them in bows, ornaments, top hats, and gaudy scarves. "Ooo-la-la!" Nancy cries in delight. 'My family is posh! That's a fancy word for fancy.'"

is available on the Disney Junior YouTube channel in America. The entire first season was also made available on Disney+ at or around launch.

The show was slated to end

after three seasons in 2021. Production wrapped in June 2020, before the third season even aired. The series officially ended its run on February 18, 2022.

Apparently, Grace has a lot that she would like for Christmas.

Apparently, Grace has a lot that she would like for Christmas.