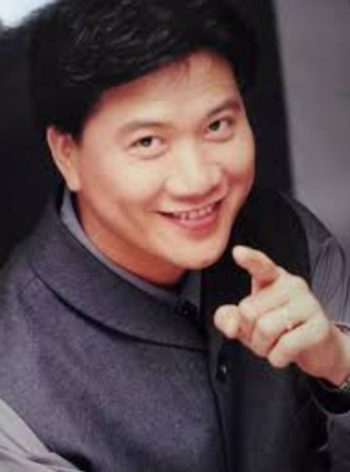 Alex Man Chi-leung (萬梓良, born 25 July 1957 in Hong Kong) note  his surname rhymes with "sun", "pun" or "fun" is a Hong Kong actor famous for his roles in late 80s/early 90s Heroic Bloodshed cinema. Known as a versatile actor with a wide range of performances, Alex had equal parts starring as both heroes and villains, and is one of the bigger names in Hong Kong gangster films.

Born in a family of nine siblings, under the surname "Hu", Alex's family had him given away as a child due to financial difficulties, where he follows the surname "Man" (Cantonese for "million") after his adoptive family. Leaving school at a young age, Alex starts a career in films at age 19, mostly being cast as extras or supporting roles, but he eventually established himself as a versatile actor in Rich and Famous and Tragic Hero where he starred alongside the likes of Chow Yun-fat and Andy Lau. It was the late 80s, gangster cinema is gaining popularity in Hong Kong thanks to John Woo, and given his ability to perform a convincingly menacing villain, Alex Man ends up getting parts as gangsters and mobsters. But as his career goes on, Alex Man would end up in leading roles in other Heroic Bloodshed films emulating John Woo, such as Heroic Brothers and King of Gambler.

Its a little-known fact that some of Hong Kong's biggest names, such as Stephen Chow and Wong Jing, owes their fame to Alex Man being willing to co-operate with them in their films, where his roles as villains draws an audience allowing the directors and producers to use this success as a springboard for their careers.

Besides his roles in cinema and television, Alex is also an accomplished singer, having performed the soundtracks of various TVB dramas he acted in during the peak of his career.

As of 2010, Alex Man had semi-retired from acting, citing his worsening diabetic condition and health problems as reasons for his hiatus.