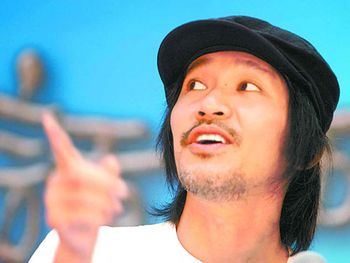 "One very important element for me to make a movie is, it has to be unique and different from any other."
Advertisement:

An influential Hong Kong comedian, actor and film director, best known in the west for Shaolin Soccer and Kung Fu Hustle, Stephen Chow Sing-Chi (born 22 June 1962 in Hong Kong) is famous for his slap stick martial arts movies. He also has something of a reputation for taking unknowns as his romantic lead, collectively called "Sing girls", all of whom go on to have successful careers in their own right.

As an actor he has been known to be the lead actor in all of his movies as well as some lead roles in films such as the God of Gamblers sequels and A Chinese Odyssey.

He was also a producer for Dragonball Evolution, but beyond that he had not given any sort of creative influence to the film, even if it needed it.note Which it did

His take on Journey to the West has him changing things up a bit by sticking to the directorship.

Advertisement:
Directed, Written and/or Starred In: