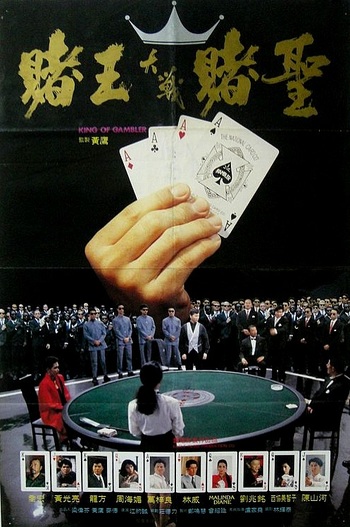 A war for territorial control between the Hong Kong triads, American Mafia and Japanese Yakuza over the gambling dens and casinos in the Kowloon region quickly goes out of control. Lin Fei, a top hitman currently engaged to his girlfriend Bobo, ends up being dragged into the warzone when the American Mafia queen, Marinda, displeased at being double-crossed over a casino deal, orders for reinforcements from the States into Hong Kong to wipe out the competition.

After an insanely long and brutal massacre scene where literally hundreds of Mafia goons attack the banquet where Lin Fei and Bobo’s wedding are supposed to take place, killing literally hundreds of members, finally it's up to the heroes to take matter into their own hands. Lin Fei and Paul, son of the triad leader, decide to unleash their inner Rambo and ends up killing maybe a hundred or so mafia goods in the subsequent revenge scene, but Marinda escapes.With the downfall of the triads and the mafia, the last remaining party, the Yakuza, decides to take over, with Marinda as their advisor. Deciding to strike first, Paul and Lin Fei successfully infiltrate the Yakuza’s hideout and stealthily takes out maybe a hundred of the Yakuzas, before realizing there are more Yakuzas and remnants of the mafias – maybe a hundred at least – in the center of the hideout, led by Marinda. Needless to say, Paul and Lin Fei will kill off the remaining hundred bad guys or so and… what the hell does this movie have to do with gambling again?

Being one of many gambling-related films released after the success of God of Gamblers, King of Gambler inexplicably changes completely into a Heroic Bloodshed flick right in the last half an hour or so, with literally nonstop action lifted from various John Woo films and more bullets fired than most war movies. In case we didn’t mention it yet, YES, this is a death-heavy film, with enough fatalities to rival Hard Boiled, despite coming out two years earlier. By the time you’ve witnessed what seems to be the 350th onscreen death in the movie though, you’d most likely forgot what’s the plot of the movie in the first place.