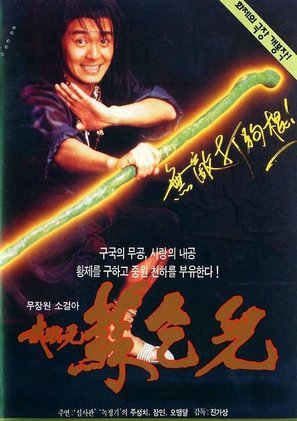 A 1992 Hong Kong martial arts comedy film starring Stephen Chow, King of Beggars is loosely based on So Chan, a legendary martial artist who lived in the late Qing Dynasty and was a member of the "Ten Tigers of Canton".

The spoiled son of the wealthy General So (Ng Man Tat) in the province of Canton (present day Guangzhou), So Chan excels in martial arts, but is incredibly lazy and cannot read or write. After visiting a brothel and falling for a courtesan named Yu Shang (Sharla Cheung), she agrees to marry him only if he wins the title of martial arts champion. To that end, So becomes eager to win her hand and cheats his way through the written examination for the imperial martial arts tournament, and wins the physical tests. Although he emerges as champion, before the Emperor can award him the title, government official Chiu Mo Kei (veteran Wuxia actor Norman Chu aka Norman Tsui) reveals So's deception on the written tests. The insulted Emperor declares So Chan's family possessions and property seized, and banishes father and son to a lifetime of being beggars.

So's life turns utterly miserable: not only does Chiu break his legs, preventing him from ever using martial arts again, but he discovers Yu Shang and her family are one of the leaders of the "Beggars' Sect", and is ashamed about his earlier actions towards her and resolves to sleep away his problems. When the Beggars' Sect uncover a ploy about Chiu planning a rebellion and assassination on the Emperor's life, Yu goes to investigate but is kidnapped by Chiu and his subordinates. So must shakes off his burdens and rescue Yu, but cannot do it alone unless the rest of the Beggars' Sect is behind him. To that end, he must gain the organization's trust by becoming their leader and earn the titular title "King of Beggars".