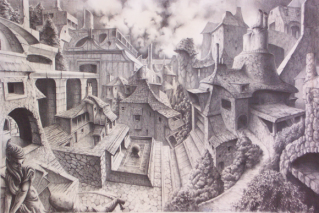 This building is so big and labyrinthine that few people know its deeper recesses. It might or might not contain big rooms or pieces of equipment, but a lot of the bulk is taken up by ordinary-sized rooms and corridors. Many are very old buildings, with successive generations building new attachments, cellars, and floors as needed. Overlaps a lot with Building of Adventure. Compare Clown-Car Base.

Big Fancy Castle is a subtrope with medieval look-and-feel.