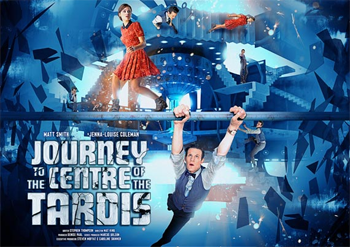 The story you've all been waiting for...
"What do you keep in here? Why have you got zombie creatures? Good guys do not have zombie creatures. Rule one, basic story telling!"
— Clara Oswald
Advertisement:

The one that reminds us what "Bigger on the Inside" really entails.

The Doctor decides to shut down the TARDIS' shields and put her in basic mode for a bit, so that Clara can drive and she and Clara might get to like each other a bit better. The TARDIS is almost immediately caught by an intergalactic salvage crew. An odd gadget leaves a burn mark on Clara's hand in the process, and amidst the chaos Clara is lost in the depths of the TARDIS. The salvagers — two brothers, Gregor and Bram Van Baalen, and an android named Tricky — intend to sell the TARDIS for scrap, but the Doctor threatens to destroy it by putting it in lockdown and activating the self destruct if the salvage crew doesn't help him find Clara. Meanwhile, something lurks in the dark halls of the TARDIS: staggering, zombie-like creatures that chase Clara through the hallways.

After a lot of running through corridors, Clara ends up in the library, where she briefly spots a book about the history of the Time War and sees a few very interesting things in it.note (Just why, and how, a book about it even exists, let alone how it can have detailed information, isn't explained just yet. Though given that the TARDIS archives console rooms that haven't been created yet, this doesn't seem that unusual.) Bram gets himself killed by trying to get too close to the console core. Gregor Van Baalen tries to steal bits of TARDIS regardless (and despite Tricky's protests), and end up hurting her so much that her defence systems run Tricky's arm through with a metal beam. It's revealed that, against all appearances, Tricky isn't a fabricated android; he's the youngest Van Baalen brother, whose siblings played a trick on him after an accident that gave him amnesia and required parts of his body to be replaced with cybernetic implants. The Doctor knew all along, but had more pressing matters on his mind. Not that the TARDIS self-destruct mechanism actually exists — that was just a fib — but the fact that the zombie creatures are future versions of himself, Clara and the remaining two brothers. Burned to smouldering husks and mad with pain, they try to grab the gang. The brothers succeed in getting rid of their future selves with the tried and trusted method of throwing them into the Eye of Harmony. Unfortunately for them, this results in their own transformation.

The Doctor takes Clara to the very core of the TARDIS, where — on the verge of tears — he finally comes clean to her about the mystery of her existence and her multiple deaths. She's extremely freaked out by it, and after a while, she counters with her own reveal. In that Time War book, she saw a thing or two about his name. However, Clara's burn mark reveals to the Doctor that he has one option left — resetting the entire timeline using the gadget that burned Clara in the first place. He pushes himself through a time crack in absolute agony, shares a brief conversation with his past self, and manages to reset everything. Clara never even knows it happened. In the aftermath, the Doctor asks Clara how safe she feels around him — just to make sure — and the brothers are back to life and not quite as mean this time around. A previously damaged photograph near Tricky's cot, which only depicted his brothers and father, has now been restored and includes Tricky standing to the side.