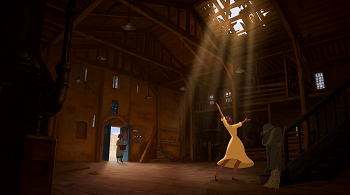 For a dilapidated old building, it looks surprisingly decent. Must be the sun shining through.
Peter Venkman: What do you think, Egon?
Egon Spengler: I think this building should be condemned. There's serious metal fatigue in all the load-bearing members, the wiring is substandard, it's completely inadequate for our power needs, and the neighborhood is like a demilitarized zone.
Ray Stantz: Hey. Does this pole still work?
Advertisement:
[slides down a fireman's pole]
Ray Stantz: Wow, this place is great! When can we move in?
— Ghostbusters (1984)

The lead character is going into business for him/herself, and hears about a building they can buy. Accompanied by their supportive friend or prospective business partner, they walk in, see the filthy run-down building... and fall in love. They usually say something like, "Isn't it beautiful?", at which point we switch to the friend's POV and/or the stunned look on their face. Often followed by a Fixin' Stuff Up montage. The building usually got this way because fictional cities Never Recycle a Building.

Can apply to other buildings and objects as well. The trope plays on POV dissonance between the characters; one sees things as they are, while the other sees things as they could be. The skeptic generally serves as an Audience Surrogate, but the dreamer gets the final say because he's the one paying for it.