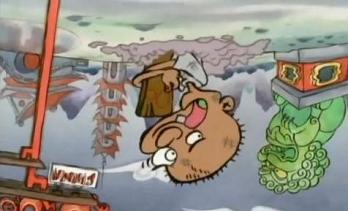 Um, Plank? I don't think we're in Peach Creek anymore.note Yes, the image is supposed to be upside down.
Argus: Where are the Eggs?
Zoe: The holes came out on the other side of the Dragon Worlds! [The fairies] found some of the Eggs, but they were too heavy to carry back!
Spyro: The other side of the world?
— Spyro: Year of the Dragon
Advertisement:

Since the Earth is round, characters who dig a hole right through Earth end up in another country. Traditionally, they end up in China. note During a significant part of history, China was the hardest place to reach for Western cultures, making it an easy choice for an exotic endpoint.

Expect it to be rock all the way through rather than magma, and for the feat to be accomplished in a comically short time, perhaps accompanied by a pneumatic drill sound effect. If the dig is fast enough, expect the camera to be upside down when the character resurfaces, righting itself when the character finishes falling upwards. Also, it will often be the same time in both China and the country digging to it.

UK writers are more likely to end up in Australia and vice versa, Russian writers are more likely to end up in Argentina or random Pacific island, and Japanese writers more likely in Brazil. Other destinations are possible, as long as the target is far enough way. The tunnel is usually dead straight and under the Rule of Cool goes anywhere the plot desires. Wherever they end up, it will usually be conspicuously foreign with as many stereotyped visual cues on display as possible. In China, they often say that if you dig hard enough you will end up in The United States.

Notably, this trope does actually have a grain of truth in it: China is one of the few major population centers in the world that includes multiple points on land directly on the opposite side of the Earth from other points on land (most points on land are directly opposite points under the ocean). None of those points are in the United States, however: most of them are in the Patagonia region of South America, which encompasses most of Chile and Argentina.

If someone is digging through the Earth specifically to hit the core, see Planetary Core Manipulation.

(Curious about where a tunnel would lead in real life? Please see our Analysis page.)

Little Dog is afraid of cats, so he digs to China in an attempt to get past one so he can get Big Dog to scare it off. However, he encounters a Chinese cat as soon as he gets there.

Little Dog is afraid of cats, so he digs to China in an attempt to get past one so he can get Big Dog to scare it off. However, he encounters a Chinese cat as soon as he gets there.