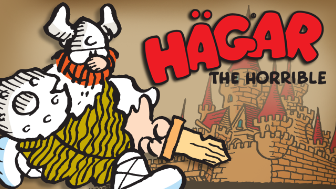 Hägar the Horrible is a classic comic strip about a red-bearded Viking, created by Dik Browne (Hi and Lois) in 1973.

Hägar is married to Helga, who is a formidable woman with bigger horns on her helmet than he has on his. The rest of Hägar's family consists of his young son Hamlet (a book-lover with no interest in violence, much to Hägar's chagrin), and a daughter called Honi who is just old enough to be The Ingenue. His best friend is a klutz called Lucky Eddie. This is a gag-a-day Strip set in Dark Age Europe covering both Viking invasions and sieges (he regularly harasses castles) and Hägar's home life.

Not to be confused with Haggis Is Horrible.

Hägar the Horrible contains examples of: