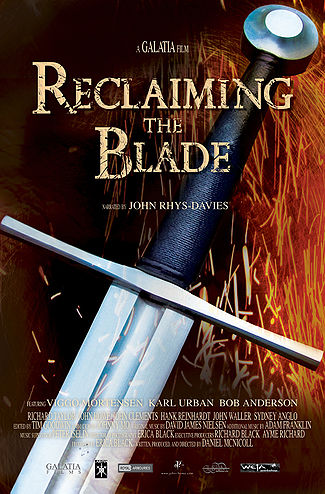 Reclaiming the Blade is a 2009 documentary on both the fictional depictions and realities of European swordsmanship throughout the ages. It features John Rhys-Davies as the narrator and includes contributions from the likes of Bob Anderson, Viggo Mortensen and Peter Jackson.

The documentary has two main sections:

Dispersed within the production is information pertaining to Eastern martial arts and swordsmithing at relevant points.

One of the most important aspects of this production is the way it compares Troperiffic fiction to Real Life. As such, trope examples below will often apply to both reality and fiction, although contributors are encouraged to give an explanation for both.

Sadly, this documentary is not well known and European swordsmanship remains immensely obscure.

This documentary includes examples of: