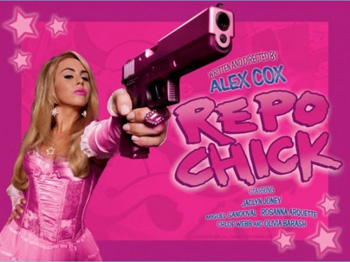 Everybody run! The homecoming queen's got a gun...
"You guys are repo men. Man, I saw a movie about you."
Advertisement:

Repo Chick is a 2009 American comedy film written and directed by Alex Cox.

Disinherited by her family for one public scandal too many, spoiled heiress Pixxi de la Chasse (Jaclyn Jonet) reluctantly goes to work for a repossession company to make ends meet. Turns out she's really, really good at it. Looking to make a quick score, she fixates on a missing train with a one million dollar bounty... not realizing that the caboose is filled with WMDs and a squad of eco-terrorists to boot.

A semi/demi/quasi/not-really Stealth Sequel-cum-remake of Cox's 1984 Cult Classic Repo Man. Shot in ten days on green screen for $180,000, and set in a world of model trains and Matchbox cars, it substitutes celebutards for punk rockers and Terrorists Without a Cause for The Men in Black alien hunting.