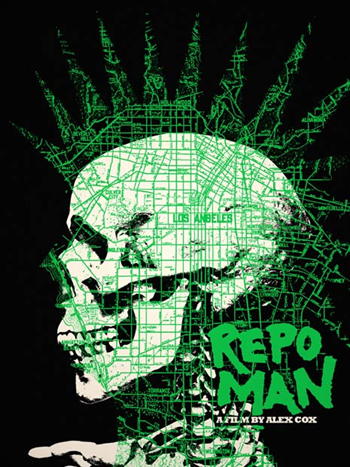 Young LA punk Otto Maddox (Emilio Estevez) has a really bad day: he gets fired from his job at the supermarket, sees his girlfriend cheat on him with his best friend at a party and finds that his ex-hippie parents donated all his money to a televangelist. He meets Bud (Harry Dean Stanton) and becomes a repossession agent. The life of a Repo Man stimulates him a great deal more than the increasingly phony world of LA punks. Through various encounters and a mad rush between competing repo men and the CIA to locate a 1964 Chevrolet Malibu, Otto learns that "the life of a repo man is always intense".

Based on a some true stories Cox picked up when he worked as a repo man. There aren't many aliens, but there's plenty of shrimp!

A script for a potential sequel was adapted as a Comic Book called Waldos Hawaiian Holiday.