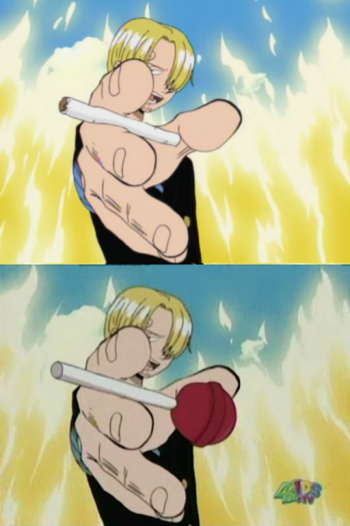 On the top: badass Sanji with his cigarette.
Below: badbutt Sanji with his... lollipop.
Carrot: We do thank people for not smoking in here, sir.
Vimes: Why? You don't know they're not going to.
— The Fifth Elephant

Censors come off as pretty lax when it comes to anything that isn't excessively gruesome or explicit. One notable exception is broadcasters seeming squeamish about showing under-age characters smoking tobacco (even delinquents) especially if the show is aimed at a school-age audience. Occasionally this is changed to chewing something.

The same can hold for under-age drinking, unless it's accidental. This gag used to be popular in the United States until Media Watchdogs cracked down on theatrical cartoons.

One anecdote claims that only R.A.T.s (Russians, Arabs, and Terrorists) are permitted to smoke in Hollywood movies. Some extend this to the French as well (R.A.F.T.s). In short, exotic villains are allowed to smoke.

Modern U.S. law dictates in what instances cigarette smoking may appear, coming down hardest on animation or other programming intended for minors. For versions meant for broadcast before the Watershed in the U.S., this trope is mandated. This can also mean that DVD versions culled straight from the broadcast version also have this trope in effect. Strangely, the law is vaguer on cigar and pipe smoking; how much those are edited can vary (and to this day even G-rated icons like Santa Claus may be depicted with a pipe). Likewise, depictions of smoking pot seem to be all over the place; it's not uncommon for made-for-cable series (i.e. those not restricted by watershed and FCC rules) to show pot-smoking in abundance, but tobacco cigarettes are totally absent.

This trope is also a particular case of Values Dissonance, as anti-smoking laws didn't really come into effect until the early 2000s. Before then, smoking was considered to be socially acceptable, with some even believing that smoking was actually good for the human body. Seriously.

A Sub-Trope of Bowdlerize.