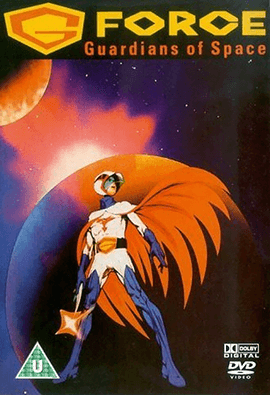 (G-Force!)
Five teenage champions! G-Force, guardians of space! Fighting for good over evil...fighting to defend planet Earth from deadly enemies from space.
Ace Goodheart: Leader of the team. Strong, vigilant, fearless as a hawk. Guarding the four young agents under his command.
Dirk Daring: Second-in-command. A crack marksman with the eye of an eagle and nerves of steel.
Agatha June: Flies like a dove, strikes like a falcon. A match for the strongest on the team.
Hoot Owl: "Hooty" to his friends. Wise-cracking navigator who flies the amazing rocket ship Phoenix and laughs at danger.
Pee Wee: Small and bold as a merlin. The tiniest hawk of them all.
These are the adventures of G-Force, five secret agents trained to fly like birds. G-Force, guardians of space!
(G-Force!)
— Opening narration
The second English adaptation of
Advertisement:
Science Ninja Team Gatchaman. After Battle of the Planets had completed its run on Superstation WTBS in 1985, Turner Program Services sub-licensed Gatchaman from Sandy Frank, in the interest of doing a new adaptation more faithful to the source material. Fred Ladd (of Astro Boy and Gigantor dub fame) was put in charge of the adaptation.note Ladd had been previously approached by Sandy Frank with the offer to write for Battle of the Planets, but conflicts in location (Ladd living in New York while production was being handled in California) led him to turn down the job.

G-Force: Guardians of Space debuted on TBS in July 1987, but only ran for a week before it was abruptly pulled and replaced with reruns of Gilligan's Island, although it did had a full run in some foreign markets, most notably in Latin America.note It is believed that Turner mainly made the series for foreign distributors in mind and only aired a few episodes in the U.S. in order to fulfill contractual obligations. It resurfaced on Cartoon Network in 1995, where it managed to air its entire run.

While G-Force was a lot closer to the Gatchaman plots, it sparked disappointment in fans who had grown up used to their own "G-Force" from the previous adaptation.note In Battle of the Planets, the team had also been called "G-Force". Its lower budget was criticized, along with the cheesy dub name changes and a single looping very repetitive backbeat that was used to fill all gaps of silence. Only 85 of the first 87 episodes (out of a total of 105) were dubbed for this version, with episodes 81 and 86 being skipped note Although it's usually assumed Gatchaman #81 was skipped for religious overtones and violence, the actual reason was due to Tatsunoko not being able to locate the rough English translation of the script, leaving it unable to be adapted by Fred Ladd. 86 was skipped due to the syndication quota already being fulfilled.

It briefly received a DVD release in 2004, of seven random episodes, but its general obscurity and Sandy Frank's license having expired (the Gatchaman rights are now with Sentai Filmworks, who markets ADV Films' uncut dub) has lead its fans to scavenge for any recordings.

Has nothing to do with the 2009 live-action Disney film G-Force.