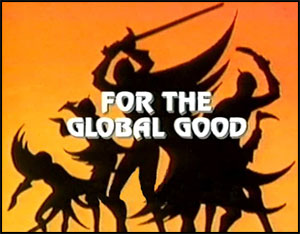 The Episode Title Card from the first episode, named after the series' Catchphrase.
Advertisement:

Eagle Riders is one of about six different adaptations of Science Ninja Team Gatchaman. This version is by Saban Entertainment.

Only 13 episodes of 65 were aired in the United States in fall 1996, but the series apparently enjoyed some more success in Europe and Australia and got to air its entire run.

This adaptation is unfortunately very hard to find, with one troper having searched even amongst torrents and coming up empty-handed. It is largely overshadowed by Battle of the Planets among the various Gatchaman adaptations. Regardless, there has been an attempt to summarize the series.