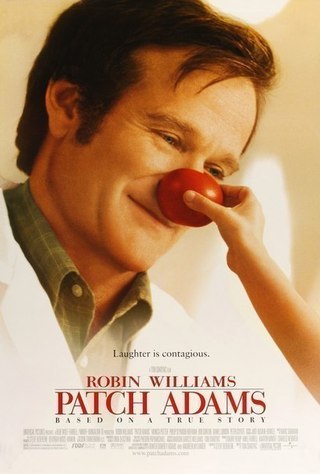 Patch Adams (1998) is a Very Loosely Based on a True Story film directed by Tom Shadyac and starring Robin Williams as Hunter "Patch" Adams, a medical student who wants to treat people, not just diseases. To do this, he bucks authority, dresses up as a clown, and acts silly and (on occasion) unprofessionally. Also features Philip Seymour Hoffman in a smaller role as Patch's roommate.

The movie centres largely around Adams's clashing with the old guard of medicine over how to treat patients, specifically their cold and detached bedside manner. Patch argues they need to be more involved with the patients and not treat them as another statistic, whilst his superiors point out that getting emotionally involved helps neither doctor nor patient.

Notably, the film received a fair bit of criticism from the real Dr. Adams, among many, over the film's representation of his views and philosophies. He believed it simplified all his work into "laughter is the best medicine." Furthermore it fabricates entire events, such as making his best friend into a woman to create a love interest, and having Patch commit several felonies which, naturally, his real life counterpart never did. To make matters worse, the money promised to Adams out of the film's profits by the studio were never paid to him—this massively delayed construction of the hospital he wished to build.