Film / Oz the Great and Powerful 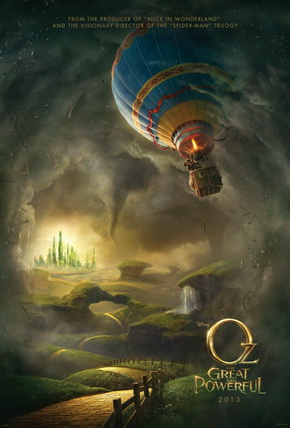 The tale of The Man Behind the Curtain begins.
Advertisement:

Oz the Great and Powerful is a 2013 fantasy film directed by Sam Raimi, and produced by the same people behind Tim Burton's Alice in Wonderland (2010) and following the leads of then-recent Darker and Edgier versions of notable literary creations such as the aforementioned Alice in Wonderland, Guy Ritchie's Sherlock Holmes films, and Snow White & the Huntsman.

The film is adapted from L. Frank Baum's 1900 novel The Wonderful Wizard of Oz. It is intended as a prequel to the book, more than the original film. As in the book, Oz is a real place, with the Wizard being somebody who came long ago in a balloon he didn't know how to use properly. It thematically resembles the 1939 film The Wizard of Oz - starting in black and white, with the main characters resembling people Oz knew in Kansas, and serves as an origin story, showing how Oz came to the kingdom.

The film stars; James Franco as Oscar Diggs, the man who would be known as Oz; Mila Kunis as Theodora the Good; Michelle Williams as Glinda the Good, daughter of the former King of Oz; and Rachel Weisz as Evanora the Good. Also starring are notable Raimi alumni, including brother Ted and Bruce Campbell, and Danny Elfman provided the score, returning for their sixth collaboration together after a long break since Spider-Man 2.