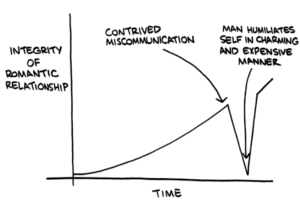 If there are zombies involved, it ends with the man eating the woman's face.
"I'm torn, because on one hand, I want to share something important that happened to me while we were apart... But on the other hand, bardic tradition demands that I withhold it all so that at some later point, you can accidentally learn an incomplete version and jump to all the wrong conclusions—thus leading to entertaining dramatic conflict later in our relationship."
— Elan, The Order of the Stick
Advertisement:

Bob is keeping a secret, perhaps even a hidden agenda, from Alicenote though gender flips are commonplace and their True Companions. He may benignly want to befriend or romance her, or less scrupulously steal something from her, or gain her trust as The Mole and betray her. Regardless, he's holding back key facts about his background which would make her doubt his honesty or outright hate him. But before long he genuinely develops feelings for her, and may find he's Becoming the Mask.

This being drama, his secret comes out in the third act and Alice and Co. reject him utterly. For extra pathos, it'll be at an important event like their wedding or after winning some award. Protests to the contrary are chalked up to "more of your lies!" Of course, this revelation comes just as Bob needs Alice to believe him. The Reveal can come in the form of a friend or enemy from their past life who doesn't want to let go or forgive, a randomly found memento or internet search.

To solve this, Bob will have to make a large, impressive and risky act of "contrition" to prove he's not the original liar anymore. Alternately, a third character (let's say Charlie) reveal to Alice that Bob really is a different person and likes her, and she runs to the airport to forgive him before she leaves.

Often, Bob could have avoided this situation if he'd thought things out and revealed his secret earlier when it wouldn't be as damaging. On the plus side, this is one narrative circumstance in which it is all but guaranteed that The Reveal Prompts Romance.

Romantic comedy, as a genre, abuses this trope. Most Chick Flicks need to have the characters break up without losing audience sympathy, so some sort of misunderstanding usually drives the third act. This might even come through a Not What It Looks Like moment.