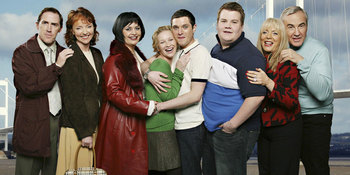 Gavin & Stacey is a comedic British Series (2007-2010) about Gavin, a man from Essex, and Stacey, a woman from Barry, Wales. The programme follows their developing relationship and eventual marriage. Most of the humour is character driven, with the central couple playing the Straight Man to their eccentric families and friends.

Seriously popular too. It moved from BBC3 and an audience of 500,000 to BBC1 where the final two episodes had an audience in excess of 10,000,000. Despite a decade’s gap between episodes, the Christmas Day 2019 episode drew an audience of 11.6 million viewers on the night and was the biggest audience on that day in over a decade. After iPlayer requests were added, it had the highest viewing figures for a scripted programme during The New '10s and the largest audience for a comedy since 2002.

Not to be confused with Ned & Stacey.