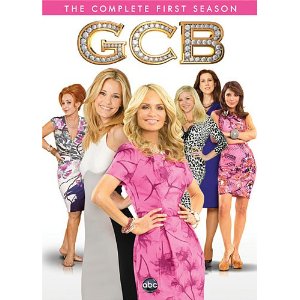 GCB is a 2011-debut American TV dramedy set in the exclusive Dallas, Texas suburb of Highland Park. It's frequently described as a Southern Desperate Housewives or a grown up Mean Girls. The show was created by Darren Star (Beverly Hills, 90210, Melrose Place, Sex and the City) and written by Robert Harling (Steel Magnolias). It's somewhat based on the book Good Christian Bitches by Kim Gatlin; the show was originally going to bear that title (it still got dropped in the ads), and then changed to Good Christian Belles before settling on the less controversial abbreviation.
Advertisement:

In Santa Barbara, California, protagonist Amanda Vaughn's husband Bill steals billions from his investors, then dies in a car crash with his mistress. Left with nothing, Amanda and their two teenage children return to Texas and move back in with her pushy socialite mother Gigi. Amanda was head cheerleader and Alpha Bitch in high school, but time and distance have helped her become a somewhat better person. Moving back home, she meets the four women she was most evil to in high school; only one accepts her apology for her past behavior, while the other three have most definitely not moved on and are not ready to forgive at all.

The show was canceled after its first season.