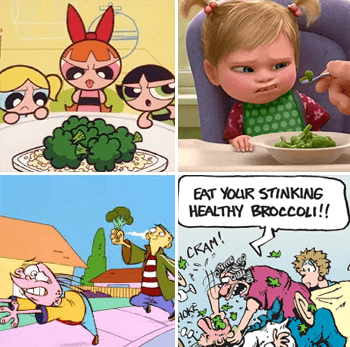 Broccoli: hated the world over, real or fictional.note L - R, top to bottom: The Powerpuff Girls, Inside Out, Ed, Edd n Eddy, and Piranha Club.
Eddie: Oh not sprouts! I hate sprouts!
Richie: Will you stop whinging, Eddie. Nobody likes sprouts.
Eddie: Why are we having them, then?
Richie: Because it's Christmas!
— Bottom

Some foods are just far more likely to show up as a hated (or outright universally or universally with one exception hated) food for a character, be they Picky Eaters or not. Weird allergies are a form of Televisually Transmitted Disease.

The foods which generate Foreign Queasine falls into this trope by default.

It is not being forced to eat a food generally considered disgusting in one's culture, that's Alien Lunch or Eat That.

Strangely enough, there's a reason certain foods, such as liver and leafy greens, tend to show up on a lot of kids' "Most Hated" lists—they actually taste different to children, and generally, they taste worse. Children are more receptive to bitter compounds in foods than adults (likely an evolutionary measure to prevent us from dying of plant poisoning while young), and tend to be put off by the bitter taste. Also, about 25% of people are "supertasters," having a higher concentration of taste buds than others: they tend to be repulsed by sprouts, spinach, coffee, alcohol, grapefruit, green tea, olives, soy, chili, soft drinks and tonic water. 50% are medium tasters, who have "normal" likes and dislikes, and 25% are non-tasters, who don't mind anything. Another reason children grow up hating vegetables is that parents often overcook them, removing much of the taste, texture and nutrients in the process.

Compare If It Tastes Bad, It Must Be Good for You, Does Not Like Spam, Everyone Hates Fruit Cakes, Haggis Is Horrible, It Tastes Like Feet, You're Drinking Breast Milk, Garlic Is Abhorrent, Haute Cuisine Is Weird, and Disgusting Vegetarian Food. If the character is unaware of what they've eaten until it's too late, that's "I Ate WHAT?!". If an adult tries to get a child to eat a vegetable Stock Yuck with the promise of a dessert afterward, that's Greens Precede Sweets.

Winston, who is a dog, understandably hates brussel sprouts.

Winston, who is a dog, understandably hates brussel sprouts.