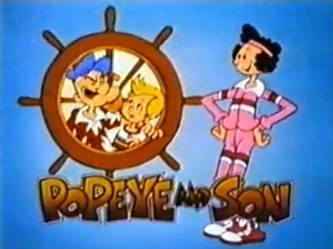 A spinoff TV series of Popeye that ran in 1987; it consisted of 13 episodes (using the Two Shorts format) and was produced by Hanna-Barbera.

Popeye and Olive finally marry and have a son. He gets named Popeye Jr. or simply Junior. Popeye's longtime archenemy Bluto also marries and has a son named Tank. Just like their fathers, Junior and Tank become major rivals. Most of the other Popeye cast like Wimpy and Eugene the Jeep show up too.

Together, Popeye and family had many adventures during the show's run. Just like his father, Junior could eat spinach (which he hated) and would gain superhuman strength. However due to network standards and practices of the era, don't expect to see any brawling like that of the classic Popeye cartoons.