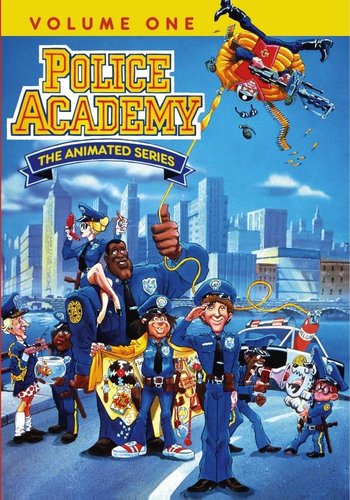 If only the actual series had looked as good as this DVD cover.
Advertisement:

Police Academy: The Animated Series (1988-1989) is an American animated television series produced by Ruby-Spears based on the Police Academy series of films note Yes. THAT Police Academy. It aired on weekdays for a total of 65 episodes. It features animated versions of several characters from the films, including Carey Mahoney, Moses Hightower, Eugene Tackleberry, and Larvell Jones, alongside Canon Immigrants the K-9 Corps and The Professor, the latter supplying the police force with the wacky gadgetry they need to combat an extensive Rogues Gallery of villains.

The series had some merchandising tie-ins. Kenner made a toy line; in the Title Sequence of Brooklyn Nine-Nine, Jake Peralta is shown looking at a Carey Mahoney action figure. Meanwhile, Marvel Comics released a short-lived comic book series under its "Star Comics" imprint.

Chronologically, it takes place between the fourth and fifth films.