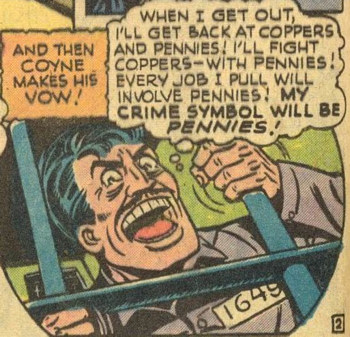 Joe Coyne demonstrates the rationality and levelheaded demeanor typical of this trope as he begins his career as the Penny Plunderer.
"I used to be somebody in this town... now everybody's got a gimmick."
— The Riddler, Batman: Hush
Advertisement:

id-i-o-syn-cra-sy: a characteristic, habit, mannerism, or the like, that is peculiar to an individual.

The type of Supervillain who can only commit a crime a certain way. This goes way beyond the Calling Card. These villains will fixate on one idea, one thing that they will continue to use over and over, which eventually becomes their entire philosophy. Everything becomes about this thing.

In real life, this is called monomania,

an obsessive fixation on one idea or thing or person. It's particularly common in Superhero fiction, where villains often only have one gimmick to establish their identity.