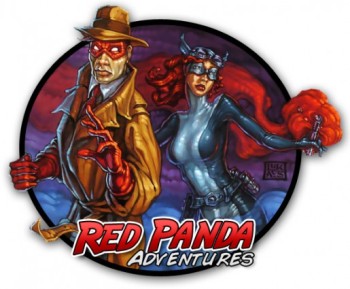 An online Radio series from Decoder Ring Theatre, homaging the "mystery man" programs of the 1930s.

The Red Panda is "Canada's greatest Super Hero", a mostly non-powered adventurer with a slew of gadgets fighting crime and villainy on the streets of Toronto. His secret identity is "one of the city's wealthiest men", whose chauffeur, Kit Baxter, joins him on his adventures as The Flying Squirrel.

The series can be both silly and serious by turns. It takes place during the Great Depression, and many episodes deal with the poverty of the time, whether it's crimes caused by it, the Red Panda's secret identity trying to use his money to help with it, or Kit's background on the streets growing up with it. It also plays with many Super Hero tropes, especially those of The Golden Age of Comic Books. More recent episodes have gotten generally darker, as the series' timeline moves into World War II.

Several years before the modern Red Panda Adventures, a six-episode series was produced with a very different concept, featuring the Red Panda as a member of Canada's "Panda Squadron" during World War II. It was also much sillier, with characters like Baboon McSmoothie, Man of a Thousand Faces, and German von German's Nazi Ninjas. It can currently be found in the Decoder Ring Theater Vault.