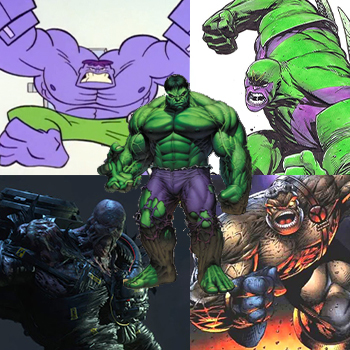 Puny human, you walked into the WRONG Anger Management meeting... note Clockwise from top-left: The Infraggable Krunk, Maul, Badrock, and Nemesis, with Hulk himself in the center.
"The Amazing Bulk... you may be surprised to find out... is a rip-off of The Incredible Hulk. Please hold back your gasps of shock."
— Obscurus Lupa, The Amazing Bulk review

As one of the most unique and recognizable superheroes in American media, The Hulk is often a subject of copying, parody, or deconstruction.

Expies of The Hulk usually exhibit the following qualities:

Compare Hulking Out and Hulk Speak, two of the surest signs you're dealing with one of these characters.

THE STRONGEST EXAMPLES THERE IS!!!