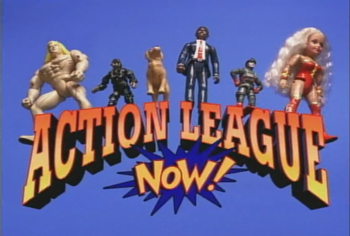 Action League NOW!
Starring The Flesh: He's super strong and super naked.
Thunder Girl: She flies like thunder.
Stinky Diver: A former naval commando with an attitude as bad as his odor.
And Meltman: With the power to... melt!
Advertisement:

Originally a segment on Nickelodeon's live-action TV series All That and then on its Animated Anthology KaBlam!, Action League NOW! centered on the crudely stop-motion-animated adventures of four superhero toys, who were forever going off on missions that were either ill-defined or just plain weird, and nearly always involved trying to stop the corrupt "The Mayor" in some zany scheme of his. What made it distinct was that the toys were all shown in their "natural state" of being 6 inches tall in a human world, seldom even moving on their own (unless being thrown or the like, which is why the show was sometimes described as being filmed in "Chuck-imation"; traditional stop-motion was used when the characters were required to do something complex).

Our heroes were The Flesh (a Conan the Adventurer doll modified to replace his hips/loincloth with a Ken-type bulge who was described as "super-strong and super-naked"), Thunder Girl (a superheroine with a [Sindy] doll head who just flew around and complained about how stupid her teammates were, even though she could be just as clueless as the others), Stinky Diver (a loose cannon with a thick British accent and perpetual body odor, made from a G.I. Joe Shipwreck action figure) and Melt-Man (a not-too-bright melted G.I. Joe-like figurine "with the power to... melt!"). They tended to suffer horrible injuries. They were accompanied by The Chief, who would often shout "BLAST IT!" and berate the team for their screw-ups; Justice the Dog, and Bill the Lab Guy, who spoke in monotone, and often made strange inventions and devices to help the League, though these would often be stolen or otherwise used to harm the League.

As an anthology segment, the series lasted from 1996 to 2000. Their spin-off show consisted of combinations of their old shorts into longer episodes.