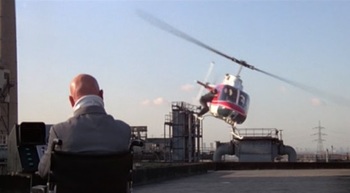 "You are now flying Remote Control Airways. Think twice. It's a long way down."
"Your car just assassinated its driver and then attempted to kill us!"
— The Doctor, Doctor Who, "Spyfall, Part 1"
Advertisement:

A variation on Vehicular Sabotage, Murder by Remote Control Vehicle is an attempt to kill someone by somehow taking control of their vehicle from a distance and causing it to crash at high speed. Exactly how the villain gains control of the hero's vehicle is sometimes explained (e.g. leaving a remote-controlled vehicle for them to find during their escape), but can be just Handwaved, or no explanation given at all.

One reason for doing this is the villain wishes to watch their demise while remaining at a safe distance. If this is the case, expect the villain to have installed a speaker in the vehicle so they can taunt the hero, and to give the hero a few close shaves before going for the kill. The hero will use this time to come up with a clever escape from the situation.

So far as we know, this is not Truth in Television yet, but cars are becoming increasingly computerized and computer scientists have demonstrated

that it is possible to hack into cars that have wireless connectivity. Car manufacturers are now being warned to take computer security into account, especially as self-driving cars become more common.

Compare Car Fu and Make It Look Like an Accident.