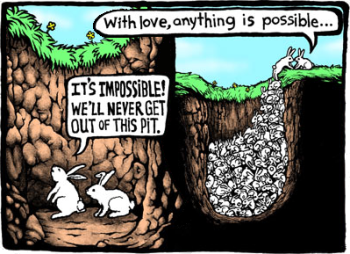 You're rabbits! Couldn't you just have dug out of there?
Baris: There must be thousands of them!
Kirk: Hundreds of thousands.
Spock: One million, seven hundred seventy-one thousand, five hundred sixty-one. That's assuming one tribble, multiplying with an average litter of ten, producing a new generation every twelve hours over a period of three days—
Kirk: And that's assuming that they got here three days ago—
Spock: Also allowing for the amount of grain consumed and the volume of the storage compartment—
— Star Trek: The Original Series, "The Trouble With Tribbles"

A creature which reproduces at an alarmingly fast rate. Often, there will be only one to start with, suggesting that it can reproduce asexually. If not asexual, the creature may employ Face Full of Alien Wing-Wong to extend its list of potential mates to outside its species or employ Express Delivery to bring on the next generation immediately. In extreme cases, there may be more total weight of offspring after a few generations than there was weight of available food. Which is completely impossible. Rabbits and rodents tend to show this trope. Truth in Television to an extent— but often comically exaggerated.

Can potentially result in a Wave of Babies. Often the real reason to fear a Ridiculously Cute Critter, Small, Annoying Creature, Adorable Evil Minions, or a Killer Rabbit especially if they employ the Zerg Rush on their foes. If they pose a threat more due to eating all available food in the area then they are a Horde of Alien Locusts.

Not to be confused with something that breeds explosives, such as Grenade Eggs, that would either be a Power-Up zone (if it helps the player) or a Mook Maker (if it doesn't).

Birth of the Mogwais (Gremlins)

After an accident where Pete tosses water to Gizmo, he and Billy they learn that by breaking the second rule, Gizmo pops out new mogwai

Birth of the Mogwais (Gremlins)

After an accident where Pete tosses water to Gizmo, he and Billy they learn that by breaking the second rule, Gizmo pops out new mogwai