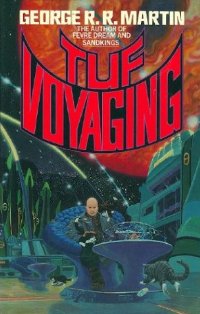 Tuf Voyaging is an early work by George R. R. Martin of A Song of Ice and Fire fame, described by That Other Wiki as 'a darkly comic meditation on environmentalism and absolute power', which sounds about right. It stars the eponymous Haviland Tuf, a reclusive, phlegmatic, very eccentric chap with a great love of Spock Speak and a great distaste for pettiness. And he often finds his fellow man to be very, very petty. He wants nothing more than to fly around the universe in his Cool Starship, The Ark, with his beloved cats and to make an honest living plying his trade.

There's a problem. A couple, actually. The Ark is a thirty-kilometer long seedship of the ancient Ecological Engineering Corps, with the power to clone and genetically engineer everything from plants to animals to bacteria. Tuf's trade is in ecological engineering, reshaping the ecologies of entire planets as his clients ask (for a modest fee). And the universe is not a nice place.

The seven stories in Tuf Voyaging chart Haviland Tuf's growth from a bumbling Spanner in the Works to a fully-fledged chessmaster with a burgeoning god complex. The stories are as follows:

This fix-up novel contains examples of: